If you walk into Street Stores Hardware store in Middletown, odds are you might see Tony Mrakovich, the owner’s son, running the forklift or working in the warehouse or, on one recent occasion, making deliveries.

But when the 19-year-old is not behind the wheel of a delivery truck for the Pine Street business, he is doing an entirely different type of driving.

Mrakovich is a NASCAR driver who took part in his first Xfinity Series race on April 20 in Richmond, Virginia.

The Xfinity Series is stock car series that is one step below the NASCAR circuit.

Mrakovich ran in the NASCAR Xfinity Series at Richmond Raceway in Richmond, Virginia, on April 20, driving the No. 28 Smart Emissions Reducer Ford Mustang.

He called the race the biggest night of his career. When he talked to the Press & Journal a couple of days before the race, Mrakovich said he wasn’t feeling his nerves yet.

He started in 35th and moved up to 12th, but after having trouble with his tires, Mrakovich finished in 24.

“It was a blast for the first one, though,” he said in an email after the race.

He said he plans to race in 10 to 12 more races this season.

“Tony is a talented young driver with a lot of potential and we’re looking forward to giving him the opportunity to compete in his first Xfinity race,” JGL Racing owner James Whitener said in a press release before the race.

Being a NASCAR driver is surreal, Mrakovich said.

“My motto was always not to have a Plan B,” Mrakovich said.

There’s more to being a NASCAR driver than just getting in a car and racing, Mrakovich said. He has to market himself, manage his social media and keep the sponsors happy.

You have to be confident and wake up every morning believing that you will be successful, he said.

“It’s not as simple as it looks, but it’s definitely fun. It’s nice being able to wake up and focus on what you love to do,” Mrakovich said.

On the street, Mrakovich said he’s one of the slowest drivers. Cars on the street have a lot of power, he said.

“[NASCAR] is not about getting in and gritting your teeth and driving as hard as possible. You really have to calm yourself and try to tame the car because it wants to do everything you don’t want it to do,” Mrakovich said.

This is Mrakovich’s first official season in NASCAR. Growing up in Elizabethtown, Mrakovich, like most kids, loved playing with toy cars. His family was into racing, but not huge fans, and his father, Shane, remembered the family watching racing on television or sitting in the stands of local dirt track races.

Mrakovich said he and his brother were always interested in racing, and kids can start racing as early as 6 or 7 years old.

“Honestly, I was too small to do anything else at that time,” Mrakovich said with a laugh.

Now, pictures of his cars line a wall of Street Stores.

Shane bought Mrakovich and his brother two go-karts — Mrakovich was only 7 at the time. The pair began racing across Pennsylvania on a weekly basis.

Mrakovich’s older brother began go-kart racing a year before him. When Shane went to his father to ask for help to buy the go-karts, Shane’s father said that Mrakovich’s brother wouldn’t be the one to become a race car driver — it would be Tony.

Years later, when Mrakovich’s brother quit racing and Mrakovich was still going strong, Shane asked his father what he saw in Mrakovich.

Tony, Shane recalled his father saying, was very calm, which is essential to racing.

Shane continues to see his cool head as Mrakovich has moved into the professional circuits. Whether his car gets a flat tire or the engine overheats, Shane said Mrakovich always stays calm.

“By having a steady head, he’s ended up having great finishes,” Shane said. “My dad, boy, was he spot on.”

Shane said Mrakovich was always anxious to get back on the track. He would tell people that he wanted to go professional, and people would scoff.

“And then you get sucked into it because now you want to do well,” Mrakovich said.

The thought of racing professionally comes at a different point for every racer.

“For me, I’ve always dreamed of doing it from the very beginning,” Mrakovich said.

As a child, he liked walking around the racetrack and being viewed as a driver.

It gets hard as a teen, Mrakovich said.

“Most of your friends are doing other things, and you have to be away all the time,” he said. “It’s a huge sacrifice for the risk of it not working out.”

Mrakovich had tough seasons when he was younger and he wasn’t as competitive. When he was 13, Mrakovich made a goal for himself — win four races. If he accomplished that, Mrakovich said that would be a sign to keep racing.

“It was awhile since I had won a race,” he said.

That season, he ended up winning exactly four races.

Racing is all about networking, Mrakovich said. He met veteran professional driver Carl Long. Around Christmas 2016, Mrakovich was talking to Long on social media.

Long invited him to test for the ARCA series that January. ARCA is another stock car racing series.

Competing in that series then helped connect him to some people in NASCAR and his father’s shop linked him to potential sponsors.

Networking, he said, helps opens doors, but then drivers have to prove themselves to keep those doors open.

“It’s so hard to break out of the Pennsylvania boundaries just being a regular dirt track racer to making it to a career. I guess you could say I’ve been praying and hoping for that moment for a long time and it came through,” Mrakovich said.

Mrakovich keeps a rigorous practice schedule, especially during the season.

Three days a week, Mrakovich runs and rides a bike. Before a race, he spends hours in a race simulator in North Carolina, which he said helps him work on staying focused during races and hone his reactions.

Does Mrakovich get claustrophobic inside the car? The inside of a car can get really hot, Mrakovich said, adding that he works to stay calm behind the wheel. With the safety measures inside the vehicle, Mrakovich said the car can undergo significant impact and the driver won’t feel a thing.

Mrakovich knows he probably should have a plan B. He said his mother was worried, too. Racing, he said, takes up a lot of time, making it hard to dedicate time for a backup plan.

During his junior and senior year of high school, Mrakovich attended Lancaster County Career and Technical Training to study auto mechanics, which he said helped him out while racing and to be able to put something on his resume.

In the meantime, whenever Mrakovich isn’t racing, he’s helping his dad at the store. Customers come and see him behind the counter, and think it’s his brother in the car, Shane said.

“They can’t believe that someone they see on TV or stock car racing would be waiting on them,” Shane said. “He’s the blue-collar race car driver.”

Tony Mrakovich @TonyMrak43
1 day ago
Been a fun weekend at virtual Texas on @iRacing P7 in Class C, P1 in Class B, and P2 in A. But all in 2nd split so I got some work to do 😤✌️ https://t.co/jXEyVwJmY7
View on Twitter

Been a fun weekend at virtual Texas on @iRacing P7 in Class C, P1 in Class B, and P2 in A. But all in 2nd split so I got some work to do 😤✌️ pic.twitter.com/jXEyVwJmY7

Tony Mrakovich @TonyMrak43
1 month ago
That couple is what I like to call the trash of the sport. Money doesn’t mean everything but this is what we get when we let it dictate our entire system
View on Twitter

That couple is what I like to call the trash of the sport. Money doesn’t mean everything but this is what we get when we let it dictate our entire system

Tony Mrakovich @TonyMrak43
1 month ago
This thing is now in our garage at home, wish we had the money to put it on the track https://t.co/qagGCeRlEk
View on Twitter

This thing is now in our garage at home, wish we had the money to put it on the track pic.twitter.com/qagGCeRlEk

Tony Mrakovich @TonyMrak43
1 month ago
Too. Many. Rules. Too big of a fine in proportion to xfinity purses. Hang a guy for shoplifting. Trying to save money and reuse. Just don’t get it https://t.co/hcrgc7LoI1
View on Twitter 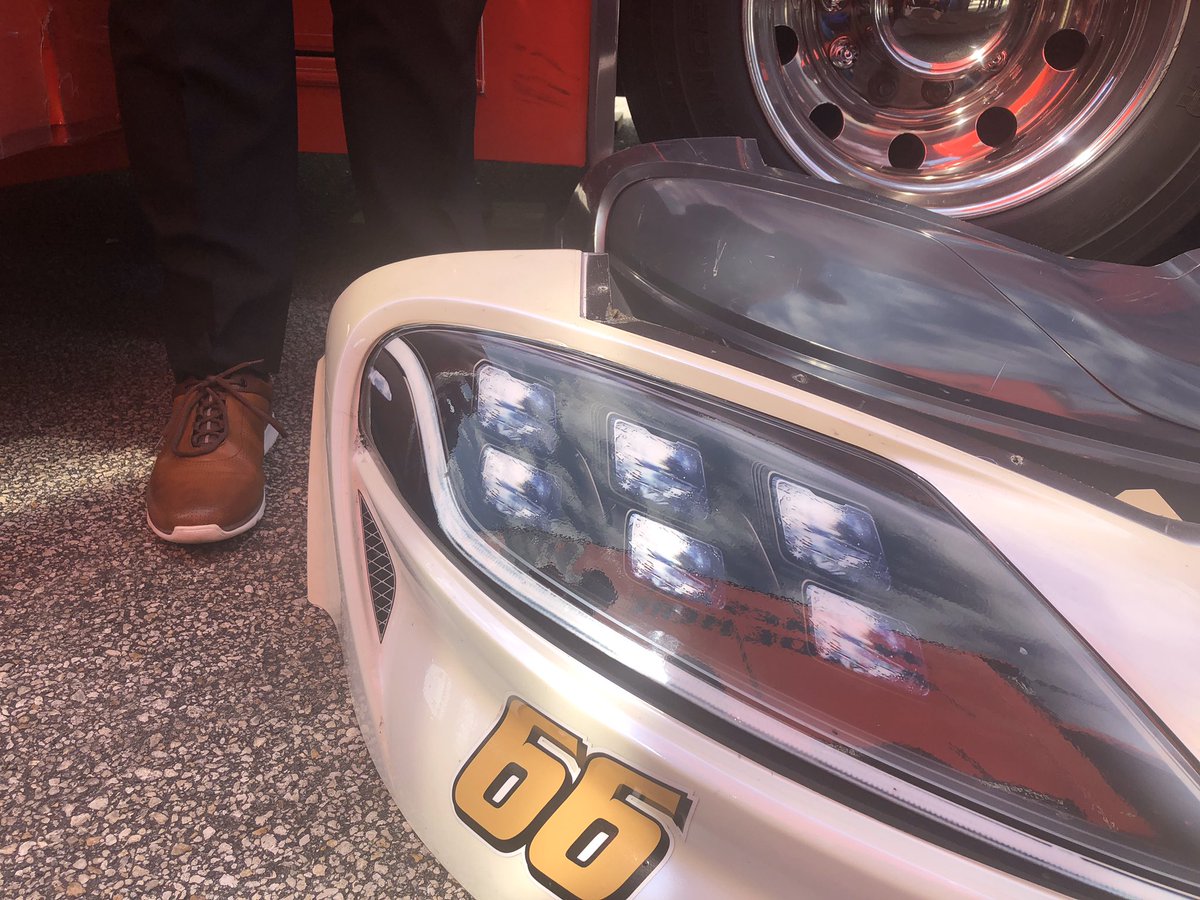